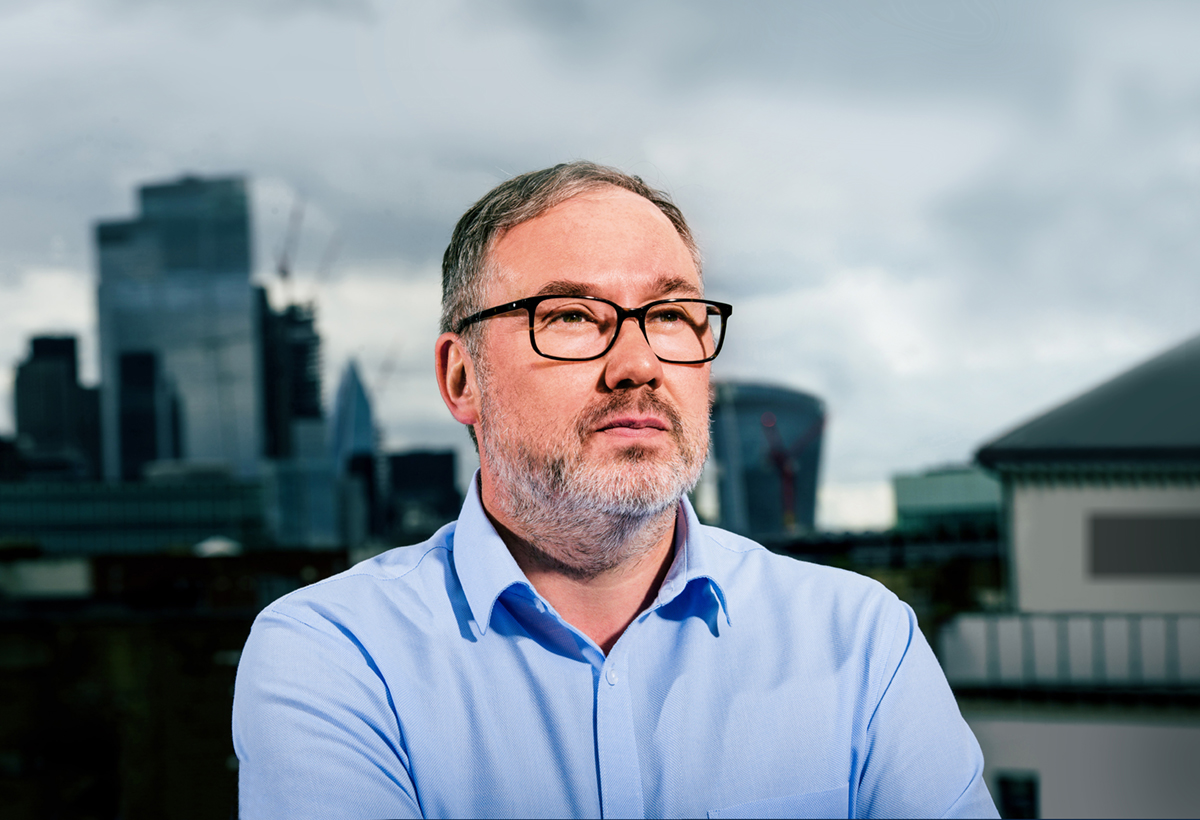 The telecoms boom and bust of the early 2000s propelled Dom Philpott from commercial electronics manufacturing into a 17-year career at aerospace and defence giant Leonardo as a ‘high potential’.

He overcame operational challenges in turnaround roles, ranging from high tech electronics to rugged castings, and across cultures in the UK and mainland Europe. He implemented highly effective process improvement programmes and addressed knotty supply chain issues locally and globally. He resolved entrenched internal and external conflicts by deploying psychology rooted in intrinsic empathy and a belief that most people simply want to do a decent job. Now he is bringing this skill and experience to bear on enterprise-grade, multi-orbit satcom on the move – critical enabling technology for the ubiquitous connectivity promised by low Earth orbiting satellites.

In the early 1990s, just after Philpott had graduated in aeronautical engineering at the University of Salford, aerospace companies were laying off workers. He turned to a broader-based field, gaining a master’s in manufacturing. His scores attracted the attention of an electronics research professor who persuaded him to undertake a doctorate, taking him away from the lab and into real operations. His sponsor was BA Dynamics (now MBDA), at a missile systems site at Lostock, Lancashire, UK.

Philpott will never forget his first meeting with Celestica’s Phil Hamilton. He describes the sometime British government advisor as a tough but inspirational leader and ‘a massively forward-thinking Industry 4.0-style visionary.’ On his first day, after establishing he had a computer and a phone, Hamilton congratulated Philpott on being the ‘area array packaging expert for Europe’. “See you in two weeks with your plan,” he waved.

Philpott delivered the electronic component roadmap which he declares was “probably rubbish” but which nevertheless attracted respectful, yet incisive questions from Hamilton. “This was my first lesson in coaching and mentoring and showed me how to manage all my teams subsequently,” he recalls. The second lesson was: “never be afraid of a blank sheet of paper. You will never have all the answers to a problem but you need to set out your initial thoughts and develop them by collaborating with the right people.” Less than a year after joining, he became a process development team leader.

While Philpott was immersing himself in process optimisation training through Lean and Six Sigma programmes at Celestica’s UK and Canadian operations, the company was going from strength to strength. Then the dot.com bubble burst. In the calm before the storm, Philpott was tasked with suggesting ways in which the company could manufacture solutions to customers’ problems. “I went round all the companies in the UK and Europe producing pump diodes for fibre amplifiers. The demand numbers they were giving us were the same but there was only enough business to support one of those companies, not 20 or 30.”

He headed for calmer waters in Edinburgh, taking a new product introduction role at Leonardo (then BAE Systems). It was a significant step up and a challenging one.

Philpott led the stream that was part of a ‘sink or swim’ operation to revive a dying targeting lasers business. He brought in fresh recruits to solve the technical challenges and applied his own expertise in designing to cost. Leonardo had thrown down a gauntlet and by sheer diligence – and an instinct for self-preservation – the team ensured the business not only survived but thrived.

“The other guys were chasing serial numbers. I stopped doing that and trusted that my guys were moving the box”

Reflecting on the contrast between that period and his current role, he notes: “The pressure was at least as high as in any start-up. If the product had failed in that first new market, the whole department would have gone. We made a success of an idea and delivered a product that is now No.1 worldwide.

It was the biggest team he had ever managed; he had to work with military and cost-plus contracts that were ‘dead’ in Civvy Street; and it took a while to understand Scottish business culture. “I made mistakes but I learned fast and came out stronger for the experience.” He acquired a reputation as a lateral thinker and someone who could break down interdepartmental barriers.

Three years later, he was promoted operations manager of merged businesses covering complex sensor systems for military airborne applications, initially on laser targeting and infrared countermeasures. “It was the kind of mid-level role that enabled you to have the most impact on a business. You were close enough to see a problem and you had the power and budget to do something about it.”

No surprise then that Philpott was not going to just ‘turn the handle,’ content to reap big margins in a massively profitable business. He started on a comprehensive continuous improvement programme. Two days to produce an electro-optic turret was shortened to one. He was told he had made more impact on Leonardo’s manufacturing than anyone else in the previous 25 years. He explains: “The other guys were chasing serial numbers. I stopped doing that and trusted that my guys were moving the box.”

His reward was a posting to head office in Italy for a year as ‘Head of Industrial Competitiveness’ but he became bored by what felt like an intangible role. He left the glory that was Rome for Portsmouth, UK, to turn round an ailing foundry making aerospace castings.

“We were being successful, outputting more work in terms of on-time delivery and quantity. But because some members of the team could not look up the line and see the work piling up, they thought there were no orders. I recall a welder expressing fears that the business was going bankrupt. Never assume people are seeing a situation in your terms.”

“This was the first time there had been no one senior to guide me day to day.” For a while, process loomed larger than what he prizes most – engaging with people. “The negative impact of that is something I have never forgotten”

He was promoted again, managing a team of one hundred in Luton, specialising in electronic warfare equipment. Having become highly skilled in business process methodologies, he was now exposed to the workings of government business and inter-factory collaboration. “In the end, businesses work on processes but they are not the be-all and end-all. Leadership is about managing relationships between people and you start out by assuming that people want to do their professional best.”

Italy beckoned again, with a VP industrial engineering role. Numerous value stream mapping projects and action plans followed over two and a half years. He initiated an outsourcing project to tackle the cost of a last-minute contract manufacturing habit that had been acquired by one business for non-core electronics.

He had shown what an industrial engineering training could bring to procurement and its success earned him another promotion. He returned to Edinburgh to transform the procurement of radar and targeting lasers, improving collaboration between engineers and suppliers. He created a ‘procurement engineering’ team whose mostly electro-mechanical members “knew how to ask the right questions of suppliers” and he promoted a handful of high potential employees, supporting them to make the grade. “I loved having a team of people with a spring in their step who really wanted to get to grips with problems.”

Another promotion was offered, managing a new centralised supply function for Leonardo’s UK factories. Far removed from direct participation in site management, he could see himself living in airports and aircraft, “accountable but not responsible”. It was time to hang up his Leonardo boots.

Philpott had been lucky with academic sponsorship, great business mentors early on, blue-chip management training and high-quality development opportunities in a large corporation, so where next? Many of Leonardo’s businesses were small, developing low volume, high value, complex product. He had relished the high-risk targeting lasers development programme and the esprit de corps that made it successful. That’s why start-up culture appealed, developing a novel technology in an immature sector with high growth potential.

He joined flat panel antenna designer All.Space in the UK before settling on Hanwha Phasor in October 2020 as the mobile satcom technology to beat. He built a brand-new supply chain function as Head of Operations, setting the company on the path to industrialisation before becoming Chief Operating Officer in 2022.

“Leonardo’s targeting lasers were successful beyond our wildest dreams. That’s why I’ve ensured that Hanwha Phasor has built the first-class operations function needed to make sure capacity can be ramped up to meet the increasingly insistent demand for high-performance mobile satcom.”

WHAT REALLY EXCITES PHILPOTT IS PEOPLE. “It has always been about the team for me. That is where I get my energy from.” He is passionate about helping a new generation of Hanwha Phasor engineers make their mark, whatever the discipline. He cites a recent conversation with two gifted young antenna designers about a patentable concept that could revolutionise the way Hanwha Phasor’s new generation product performs. “When you have like-minded individuals united by goodwill and talent, you can building a business that has real substance. I am proud to say we have those people and that business.”