A very large array of opportunity 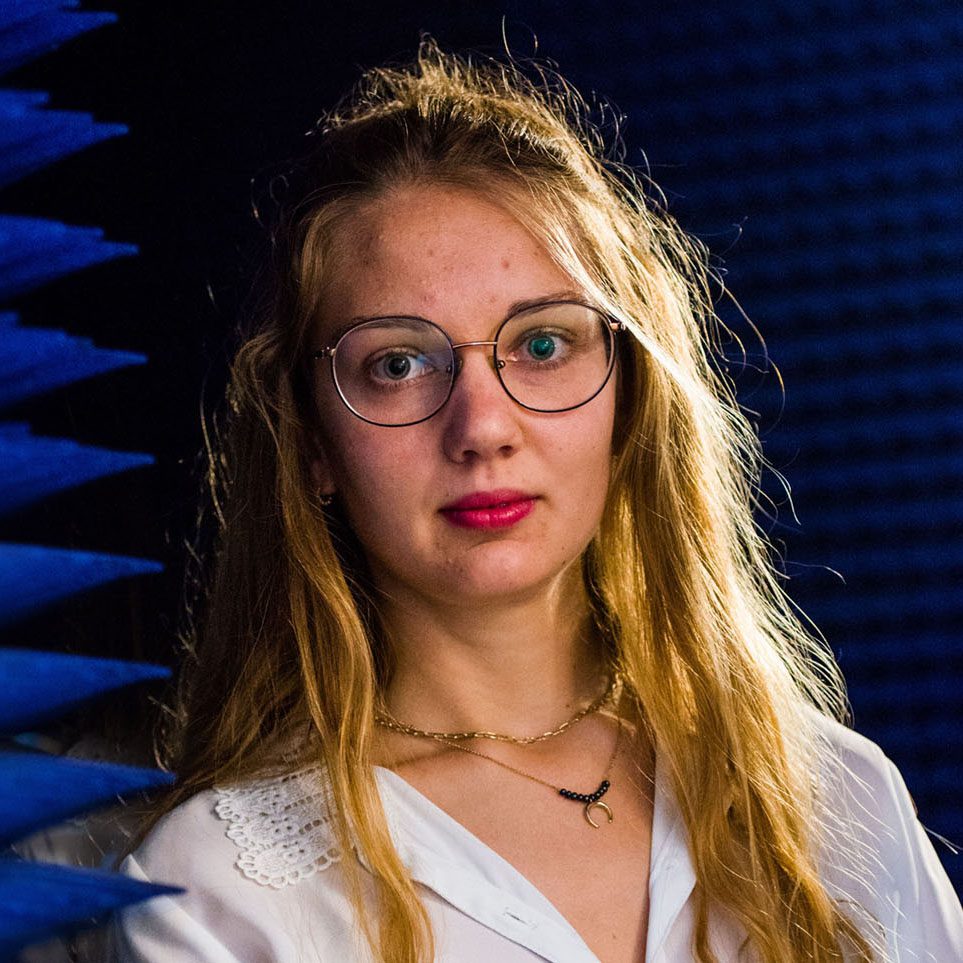 Big technical challenges at the cutting edge, experts who love to share their knowledge and a rapid-growth ‘scale-up’ business based in the heart of London. It’s been the ideal next step from my graduate programme at the European Space Agency, says Senior Antenna Engineer Sophie Gomanne.

“I was brought up in Toulouse and my Dad still works for Airbus Defence & Space,” says Senior Antenna Engineer Sophie Gomanne, “so there was a good chance I would fall in love with space from the start.”

“I wanted to experience the fast-paced energy of a pioneering start-up. Yet, I didn’t want the risk of a completely new business.”

After exploring a transmit array for reconfigurable reflector antenna in her Master’s degree, she was among those chosen from hundreds of applicants to land a place on the European Space Agency (ESA) graduate programme.

She was assigned to work on the development of an antenna for one of ESA’s flagship Earth observation programmes. Mission Biomass is designed to deliver crucial information about the state of the world’s forests and the role they play in the carbon cycle. Her work focused on enabling the characterisation of a P-band synthetic aperture radar (SAR) antenna with a 12-metre deployable reflector.

“At that diameter, you cannot run tests easily. So you rely extensively on simulations,” she explains. “But P-band is such a low frequency, you’re borderline with other RF simulation tools. So you can’t rely on them either. The challenge is to build tools and methods to get reliable results.”

Gomanne made good progress with her team and, unusually, ESA extended her one-year graduate assignment twice. However, it was time for a change.

Looking for the best of both worlds

“I had an offer from MDA in Canada but having come from a huge organisation, I wanted to experience the fast-paced energy of a pioneering start-up. Yet, I didn’t want the risk of a completely new business.”

“In a bigger company, I would have just got a memo, not the personal touch.”

Drawn to London, Gomanne heard about Hanwha Phasor. She was impressed by the complexity of the AESA, the scale of the company’s ambition and the stability provided by the giant Hanwha group.

“My career plan is to go into my subject in real depth and then expand to encompass other areas so an opportunity to explore this radically changing area of antenna technology was ideal.”

On the road to optimisation

After working on antenna calibration, Gomanne’s role has widened to drive the evolution of a methodology for antenna specification and optimisation, initially for land-based AESAs, then marine and in-flight.

In a core module measuring 180 by 360 mm, some 150 transmit and 110 receive ASICs are connected to around 600 and 450 patch antennas respectively. In a six-module system, that totals c. 3,500 on the transmit aperture and just over 2,500 antenna elements on the receive.

“That’s a lot of variables to contend with,” she says, “but the essence is simple. In each development cycle, we work from component to component up the system, trying to retain as much signal as possible.”

At each stage, the optimal solution is built using interdependent modelling to meet specific targets: phase-matching the feeds within a polarisation, and minimising both the active return loss of the antenna and maximising isolation. With the former, a key area for improving performance is feed track optimisation, adjusting the exact detail of lengths and bends.

“We’re highly interdisciplinary. Software, systems and manufacturing experts all sit nearby. We talk about what we’re doing and learn a lot from each other.” 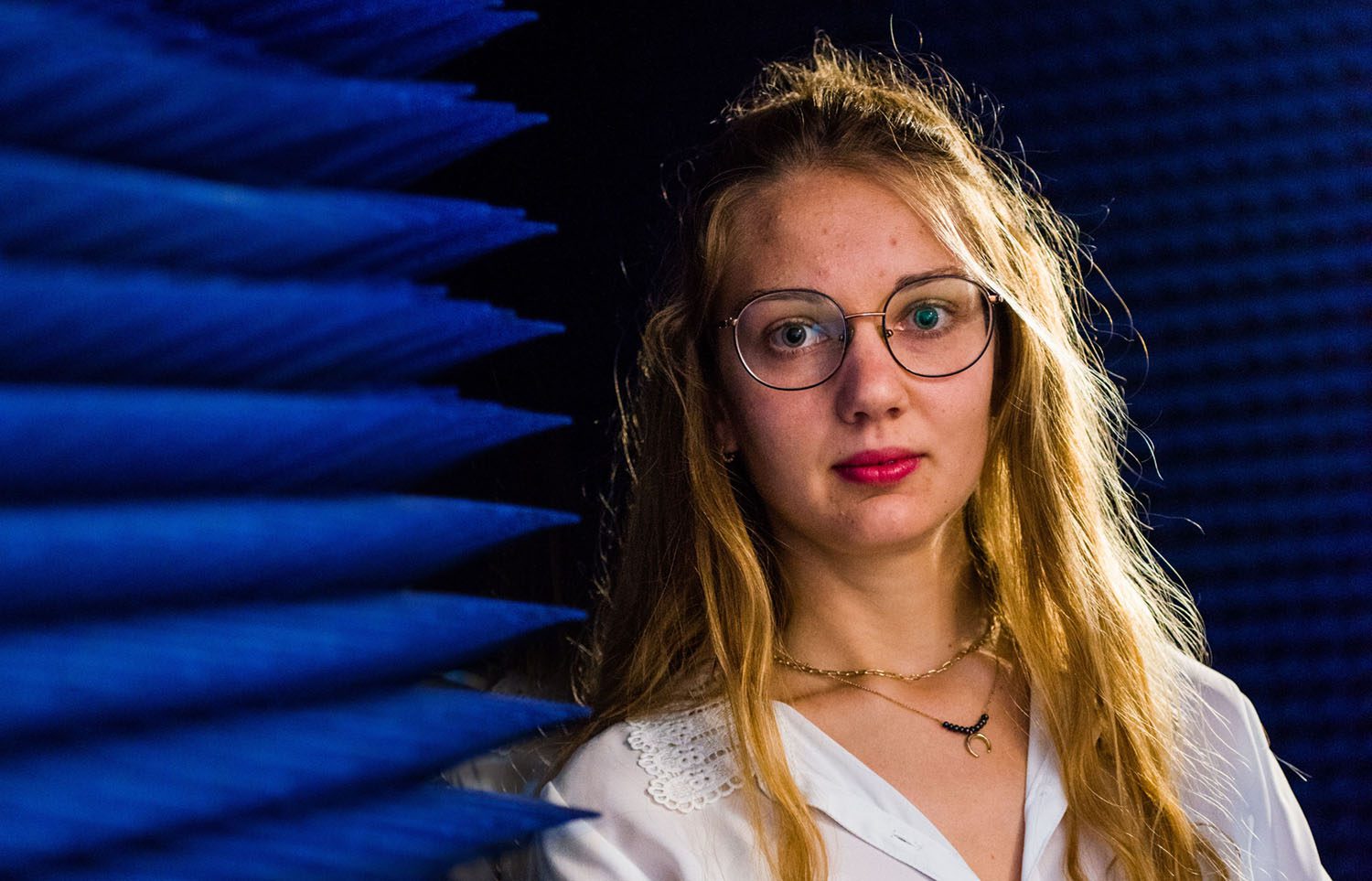 Adapting the padstack design has required fresh thinking and creativity.

“Starting from the chip at the bottom, we try a variety of shapes and orientations – and we adapt other variables like the diameters of vias, the conductive tubes that connect the layers of a multi-layer PCBA.”

A variety of techniques will be introduced to optimise the design and reduce loss. This ranges from maximising efficiency though minimising overall track length; optimising the active return loss over the frequency bandwidth; and reducing co- and cross-polarisation coupling.

Gomanne has been impressed not just by the expertise of her colleagues but by a collaborative ethos which makes it easy to find the right person able and willing to help.

Learning from the experts

“As we’re still relatively small, we’re highly interdisciplinary. Software, systems and manufacturing experts all sit nearby. We talk about what we’re doing and learn a lot from each other.”

This interchange was useful in designing vias within the PCBA.

“For antenna designers what matters is how much copper you’re using relative to drill diameter. For mechanical and manufacturing engineers what matters is the finished hole size. Simon Cushin [Head of Hardware] explained the latter at my desk one day, saving me quite a bit of time. In a bigger company, I would have just got a memo, not the personal touch.”

“No one has done what we’re trying to do but we’re getting closer and closer. It’s antenna history in the making.”

At the end of each optimisation cycle, the designs are passed to a PCBA manufacturing partner who feeds back on the changes needed for volume production of components such as fillets, pads, anti-pads and floods. Once the best overall design is achieved for a quad cell, larger arrays closer to the size of the final product are modelled. Radiation patterns are studied as are other aspects of overall performance including scanning performance encompassing antenna efficiency and beam pointing errors, and any frequency-dependent behaviour.

“Being able to see the direct impact of my work on such a complex final product is very satisfying,” says Gomanne. “No one has done what we’re trying to do but we’re getting closer and closer. It’s antenna history in the making.”

Being part of Hanwha Systems is exciting. “I’ve been following the LEO constellation race between the big players so I was delighted to hear about Hanwha’s recent investment in OneWeb. To win on this scale, you’ve got to work together and share what you’re best at.”

“You need brilliant individuals but you need to encourage them to work together in the best possible way. That’s what we have here and that’s what makes it a pleasure to come to work every day.”

If you would like to join our elite club of technically expert and inspired engineers, apply here.